Dr. Seuss’s How The Grinch Stole Christmas! The Musical 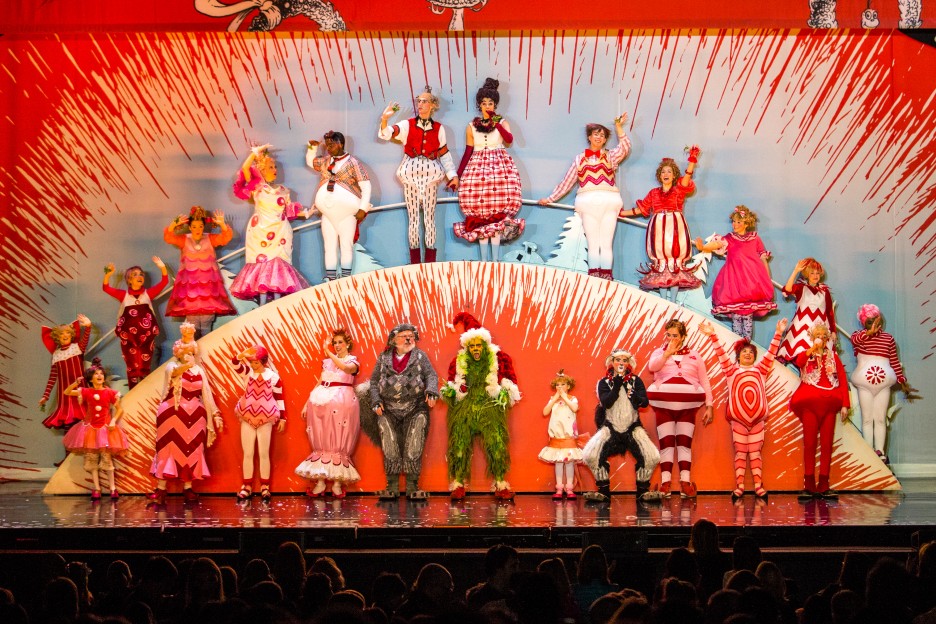 
[By Lynnett. H] The holiday event Dr. Seuss’s How the Grinch Stole Christmas! The Musical delighted audiences of all ages at the Denver Center for the Performing Arts on December 3rd–8th in the Buell Theatre.
The musical follows the basic outline of the 1966 Chuck Jones-directed classic cartoon, How the Grinch Stole Christmas!, which was based on Dr. Seuss’s 1957 illustrated children’s book. Prolific children’s author Theodor Geisel, better known as Dr. Seuss, wrote the book to criticize the commercialization of Christmas, and the musical emphasizes the theme.
The sets wonderfully reproduce the whimsical, off-kilter illustrations that made Dr. Seuss famous. For those who are not familiar with the story, the main character, the Grinch (Phillip Huffman), is a furry green misfit who lives as a hermit in a mountaintop cave overlooking the village of Whoville. For 53 years he has hated the noise, feasting, and celebration among the Who people, and on Christmas Eve he decides to stop Christmas Day from coming at all.
Disguising himself as Santa Claus, the Grinch dresses his faithful dog Max as a reindeer, drives a sleigh into town, and burglarizes every home in Whoville, taking away every Christmas themed-item from their houses. He steals decorations, candy, presents, and even the food for the village Christmas feast.
The musical’s creators (book and lyrics by Timothy Mason, music by Mel Marvin) included a stand-out moment of audience participation. Given the well-known and much-loved music from the 50-year-old cartoon (featuring music and lyrics by Albert Hague and Dr. Seuss), they raised the lights on the audience for a sing-along to “You’re a Mean One, Mr. Grinch,” with lyrics cleverly printed on various props. Unfortunately, the new music in the stage production is not particularly memorable.

While the Grinch continues his crime spree, Cindy Lou Who (played winsomely on Tuesday night by Rachel Ling Gordon) awakens to find him stuffing the family tree up the chimney. He tells her that he plans to repair the tree in his workshop then sends her off to bed.
At this point, the musical expands and deepens the cartoon tale, bringing a beating heart into the simple story. Cindy Lou Who, a trusting toddler, does not obediently go back to bed. She wants to spend time with Santa Claus and is distraught to find that he lives alone. At first the Grinch is comically horrified when the toddler touches his hand, but as she hugs him, sings him a song, and cuddles next to him, we see his inner conflict and the beginning of a desire to leave his self-imposed isolation. Rather than the sudden change of heart in the cartoon and book, the Grinch’s heart in this show softens by degrees.
Although Cindy Lou Who begs the Grinch to stay until Christmas morning, she agrees to go back to sleep, and the Grinch and a very reluctant Max steal the rest of the town’s Christmas goodies before returning to Mt. Crumpit. As morning dawns, the Grinch listens excitedly to hear the cries of despair coming from the people of Whoville. Instead, they gather around the town’s denuded Christmas tree, light it with their own candles, and clasp hands to sing.
The Grinch, confused, realizes that Christmas is not about gift-giving but means something more. (The meaning of Christmas is never overtly stated; the show avoids religious themes and instead celebrates love for family, friends, and neighbors.) His heart grows three sizes, in a humorous sight gag involving lighted hearts under the green fur of his chest. The Grinch and Max race back into town in their sleigh, returning all the gifts.
Cindy Lou Who is delighted to see her friend again, and in an extended comic bit, the Grinch struggles to say the words “Merry Christmas,” with much audience participation to help him along. The show ends with the Grinch and Sam joining the townspeople’s Christmas feast with much song and merriment. 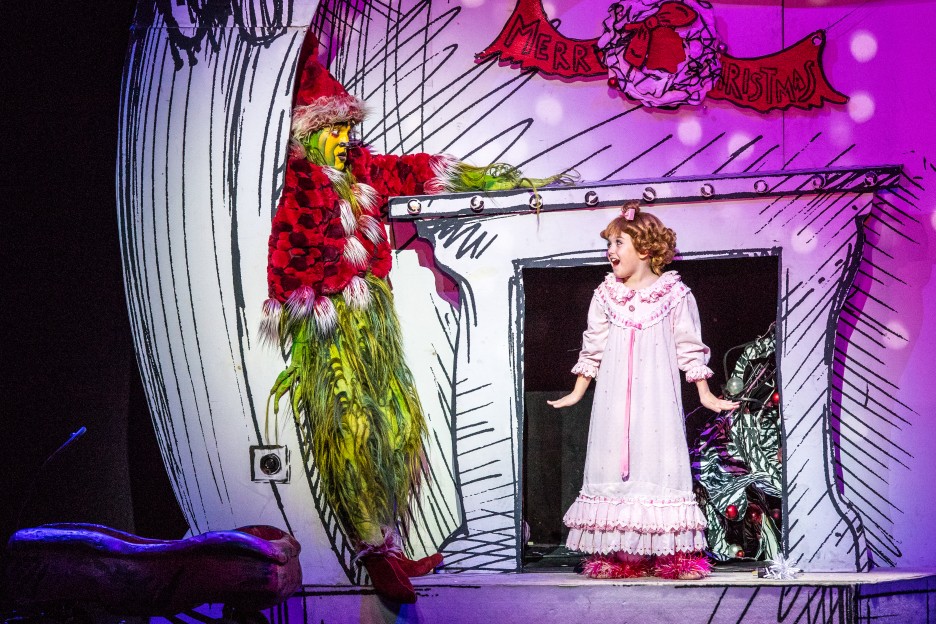 Philip Huffman fully inhabited the character of the Grinch, in all his curmudgeonly glory. Taking advantage of his fur-tufted hands, pot-bellied green body and elaborate makeup, Huffman gave a broadly comic performance, taunting audience members, singing with gusto, and creating laughter for a character who might be a bit scary for the smaller children.
Instead of using the nameless narrator of the cartoon version, the live musical tells the Grinch’s story through the character of Max as an old dog, looking back on the events of his life. Old Max, played by Bob Lauder, acts as the conscience of the story, and the role and highlights his rich bass singing voice. Jared Starkey displayed wonderfully canine behavior as Young Max, and the villagers’ round stomachs, bright hair and outlandish costumes bring Seuss’s vision to life. Rachel Gordon’s pure, high singing voice and innocent, childlike demeanor as Cindy Lou Who brought warmth and joy to the whole production.
The show began at a kid-friendly 7 pm and proceeded without intermission, clocking in at an hour and twenty minutes—about the length of an animated Disney movie. It’s a lighthearted production with a strong cast, although ticket prices are quite expensive for families, especially for small children who might not make it all the way through the show.