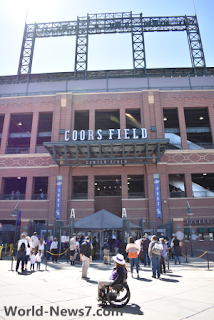 The Arizona Complex League club will be led by Manager Fred Ocasio with Cesar Galvez serving as bench coach, Dave Burba and Helmis Rodriguez serving as the pitching coaches and Trevor Burmeister returning as the hitting coach.

Ocasio returns to a managerial role after serving as the High-A Spokane development supervisor in 2021 and the supervisor of development for Short-Season Boise in 2019. His last managerial stint came with High-A Lancaster/Modesto, where he managed from 2015-18. Entering his 26th season with the Rockies organization, Ocasio has also served as a manager of Low-A Asheville (2013-14), manager of Short-Season Tri-City (2006-12), hitting coach for Tri-City (2001-05), hitting coach for High-A Salem (2000) and hitting coach at Rookie Level Tucson (1998-99). His managerial record includes a championship with Asheville in 2014 and three trips to the Northwest League Championship with Tri-City. The former infielder spend two years as a player in the Rockies organization from 1994-95 before moving into a coaching role.

Galvez moves into the bench coach role with the ACL Rockies after serving as a coach with Double-A Hartford in 2021, his sixth year as a coach. Prior to his time in Hartford, Galvez spent three seasons (2017-2019) as a coach with Short-Season Boise, and was tabbed to manage Boise in 2020 prior to the cancellation of the Minor League season. Galvez spent seven seasons as an infielder in the Rockies’ Minor League system from 2010-16, reaching as high as Triple-A.

Burmeister enters his third season with the Rockies organization, his second as the hitting coach with the Complex League Rockies. He was originally hired as the hitting coach for Rookie Level Grand Junction prior to the canceled 2020 season. Prior to joining the Rockies, he served as the assistant baseball coach and recruiting coordinator for Madison College (2016-19) and as the assistant baseball coach for the University of Minnesota Duluth (2015-16).

Gonzalez enters his 23rd season as the manager for the Rockies’ Dominican Summer League team. In addition to his role as manager, he also oversees all aspects of infield work and fundamentals for both of the DSL clubs and the complex. Prior to becoming a coach, Gonzalez spent five seasons as a player in the Minor Leagues with Oakland (1989), Colorado (1992-95) and Cleveland (1996), as well as two seasons in Taiwan and Italy (1996-97).

Jose begins his 17th season with the Rockies, his third as manager of the Rockies’ second DSL team. He previously served 14 seasons as a hitting coach in the DSL. In addition to his managerial duties, he also works in various areas of player development. A former professional player who originally signed with the Rockies in 1999, Jose played in the Rockies’ Minor League system for three years.

Deduno enters his third season as a pitching coach with the Rockies after joining the club prior to the canceled 2020 season. Deduno entered the coaching ranks after a professional pitching career that included Major League stints with Colorado (2010), San Diego (2011), Minnesota (2012-14) and Houston (2014-15).

Nunez begins his 15th season with the Rockies, all as a coach in the Dominican Summer League. The former Rockies Minor Leaguer (2001-06) works with players in all areas of defense, baserunning and hitting.

Rosario will serve as a hitting coach for the DSL clubs for the third season. A native of San Juan, Puerto Rico, Rosario played in the Puerto Rican semi-pro leagues for 12 years and served as the travel manager for Team Puerto Rico in the 2013 World Baseball Classic. He also worked for Major League Baseball’s After School Program for kids ages 14-18, where he coordinated tryouts and games and recruited coaches.