On the 17th, the Colorado Avalanche home stadium 'Ball Arena' had a match against Minnesota Wild, and the Colorado victory resulted in 53 points 'unmoved first place' 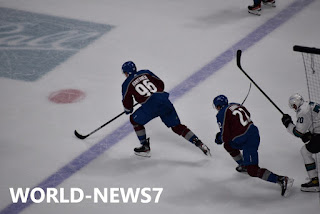 (Denver = Wongeol Jeong) In the match between the NHL Colorado Avalanche and the Minnesota Wild held at the Denver Ball Arena in Colorado on the 17th local time, Colorado won with a 4-3 score.

In the first quarter, Avalanche had a good chance with Toews' exquisite pass to the door, but it didn't lead to a goal. Afterwards, Mackinnon attempted a shot from long range, but the goalkeeper saved it.

Toews had a chance to score a goal alone with nine minutes left in the first quarter, but he also failed to score.

Makar did a good job in defense. Makar took control of the puck and made fun of the opponent's striker.

With about four minutes left in the first quarter, Colorado had a great opportunity.

In this situation, Colorado managed to outrun Minnesota by two points, with Mikko Rantanen scoring a goal with 4:03 minutes left in the first quarter and Alex Newhook scoring Girald's pass with 2:21 minutes remaining.

Minnesota scored a point at the start of the second quarter.

23 seconds into the second quarter, Minnesota's Kevin Fiala scored a goal, leading to Colorado 2, Minnesota 1, and Minnesota by one point.

There was also a fight.

Minnesota's Jordan Greenway knocked down the Colorado goalie, and Colorado defender Kurtis Macdermid, who was on the doorstep, followed up in a brawl. Both players were penalized for this brawl.

With 6 minutes and 43 seconds left in the second quarter, a rare scene came out.

Minnesota's Ryan Hartman received a two-minute penalty for lying on the puck in front of Minnesota.

At 6:46 in the third quarter, Minnesota's Kirill Kaprizov put the game back on track.

Kaprizov's shot from the Colorado left front door was deflected and flowed into the net, making the score 2-2.

Colorado played the last thing in the third quarter.

Colorado's Nathan Mackinnon's shot went under the feet of a Minnesota goalie, which slid along with the goalie's skates into the goal line.

This was recognized as a goal as it passed to the referee's video decision.

But Minnesota wasn't easy either.

With 2:51 minutes left in the third quarter, Kirill Kaprizov scored a goal for Minnesota to bring the game back to tie.

Colorado and Minnesota were tied for a match within regular time. The match went over time.

The two teams drew without a goal in the five-minute overtime. Both teams went into the shootout.

In the shootout following overtime, Colorado's second shooter, Mikko Rantanen made a goal, the puck slipped through the goalie's leg. Afterwards, a shot from Minnesota's Kirill Kaprizov went into goalie Pavel Francouz's glove, turning the game into a 4-3 Colorado victory.

In this game, Colorado's door-to-door build-up stood out.

Colorado neutralized the opponent's defense with a quick pass in front of Minnesota, but the goal luck did not follow much.

With this victory, Colorado firmly maintained its No. 1 position in the Western Central league.

Colorado's next game will be held on the 19th at the Anaheim Ducks and Honda Center.